We CAN Solve America’s Traffic Nightmare

We CAN Solve America’s Traffic Nightmare

It’s simple economics. If you’ve stood in an endlessly long line for a free doughnut or burrito during a fast-food promotion, you get it. If you’ve avoided that kind of scene, you get it, too. What on a normal day would be a manageable wait time turns into a queue down the block.

What’s happening is that people flock to what is underpriced in the market. Offer something for free and you get a line. Sell it for a fair price and the crowd thins out as people start judging whether what they’re paying is worth the charge―in both time and money.

It’s the same thing with transportation.

Driving on most roads is “free” so we prioritize driving in the belief that we’re spending zero dollars to get somewhere. In reality, especially as cities both large and small see thousands of new residents pour in every year―each with the expectation that he or she will drive a single-occupancy vehicle to work daily―the cost is high and getting higher. Cities and regions suffer crippling traffic congestion that is hurting economies and putting intense pressure on our environment and quality of life.

Transportation is now the number one source of carbon pollution in the United States, according to the U.S. Energy Information Administration. New research predicts that air pollution worsened by climate change will cost tens of thousands of lives worldwide by 2030 if positive changes don’t occur. Previous research has already shown that more than five million people worldwide die prematurely every year due to air pollution. Study after study has indicated that more roads bring more traffic and that those highways destroy neighborhoods, pollute the air, and turn our landscape into a vast concrete monument to cars.

Paying to Use Congested Roads: A Solution that Works

To help alleviate the situation, urbanists, planners, environmentalists, city leaders, and many others propose all kinds of transit options and endless education campaigns, including online tools and apps, bike-sharing programs and incentives, pocket parks, and pedestrian malls. And yet, traffic increases. We have a good idea of what people need to do, but we’ve also learned that asking people to give up what they think is convenient and free won’t work.

What we need is an organizing system of supply and demand.

Enter Go Zones, or what urban planners have long known as congestion pricing, the common sense idea that we get what we pay for when we use a utility like roads and highways. Basically, drivers pay an automated fee to enter highly congested streets at peak hours; in return, they get the promise of smooth-flowing traffic and reliable travel times. Prices are set at the lowest possible level to free up just enough road space to eliminate bottlenecks.

London, Singapore, Milan, and Stockholm have all implemented such programs, and now, Los Angeles is hoping to become the first U.S. city to successfully adopt this system. People who live and work in Los Angeles lose an average of 104 hours to traffic per year, more than residents of any other American metropolis. If you’ve visited L.A. even once, you likely have a traffic horror story to tell.

The Southern California Association of Governments (SCAG) has kicked off the 100 Hours campaign with a host of events and billboards highlighting the fact that L.A. drivers sacrifice to traffic the equivalent of two and a half weeks of vacation, 100 picnics in the park, or 48 game nights with family each year.

The campaign makes the case for adopting a package of proven mobility solutions from around the world, with the next step convening stakeholders to gain input and recommendations on tailoring a Southern California Go Zone to Los Angeles’ unique circumstances, constraints, and aspirations. As L.A. starts readying for the 2028 Olympics, a Go Zone could be one of many innovations to be explored in an effort to ensure the region’s notorious traffic doesn’t prevent Angelenos from enjoying the Games.

Implementing Go Zones can be pretty painless. The system―like almost any involving supply and demand―organizes itself. As international transportation specialist Jonas Eliasson said in his popular TED Talk on the topic, when Stockholm introduced pricing in January 2006, traffic to the city center dropped by 20 percent literally overnight. That’s like weekday driving on Olympic Boulevard eastbound at noon instead of 5 p.m.

A follow-up study in Stockholm to see what made people change their behavior so drastically and so quickly revealed that the majority of those questioned had no idea. In fact, most surveyed had no sense that their behavior had changed at all. The change had seemed a natural response, and most drivers were confident they had favored congestion pricing all along, though a study before pricing was introduced showed 70 percent of the population was opposed.

London implemented the idea in 2003, not only allowing drivers to get to their jobs faster but also creating funds to pay for more-frequent buses, safer bike lanes, better sidewalks, and more public space in general. The 20 percent drop in traffic there meant about 90,000 fewer vehicles in the congestion pricing zone each day and raised some $200 million by 2008–09 to put back into the city’s transportation system. Some 70 percent of people affected by the charge switched to other modes of travel at various times.

In addition, both cities have experienced a 10 percent to 16 percent reduction in harmful emissions, with Stockholm reporting a 45 percent drop in child asthma.

People in these cities can still drive, mind you, but they must put a value on their time behind the wheel and pay more when necessity demands it. Think about it this way: If you need to get to work by a specific time, or if the cost of running late is high―such as a missed flight―you should be able to pay to get somewhere more quickly, right? And the result could even be money saved, such as when a parent is racing to daycare before the $1-per-minute late charge kicks in, or when a plumber can head to one last job at 5 p.m. to earn $100 more.

Don’t you use your money to make things more cost-effective and convenient in other ways?

The solution makes sense economically and in terms of social, environmental, political, and security concerns. And as more cities globally become more competitive economically, the demand for driving will only increase. Finding solutions now is a home run for everyone.

What About Low-Income Commuters?

The status quo of prioritizing space for cars instead of space for people reinforces the inequality already in place in American cities. Roads are often constructed in ways that divide neighborhoods, and the pollution from those roads most affects people of lower incomes. Poor air quality and climate change, in fact, most seriously impact the poorest and most vulnerable.

Today our transportation system privileges those who can best afford the high costs of car ownership, including insurance, gas, and upkeep. Those too poor, young, or old to own and drive a car rely disproportionately on public transportation that is bogged down in traffic. Not only would a Go Zone speed up L.A.’s busy buses, but revenue from tolls could fund investment in new bus lines and better services and subsidize toll discounts for lower-income drivers unable to pay the full amount.

Critics may respond that taking away a “free” option is unfair. But as UCLA urban planning professor Mike Manville argues, the existing system―in which cars are a necessity, transit is spotty, and affordable housing can be found only on the outskirts of cities―also is far from fair.

The once-popular idea that the automobile brought us independence, freedom, and a ticket to the open road of opportunity seems like gallows humor today as we tangle with traffic at every turn in America’s urban centers. It’s clear that what we once thought was “free” and a ticket to “freedom” is trapping us in our cars and neighborhoods, to the detriment of our own health and quality of life. But if L.A. can get on board with the Go Zone, perhaps the rest of America will follow, giving us healthier air, more time, and a better future. 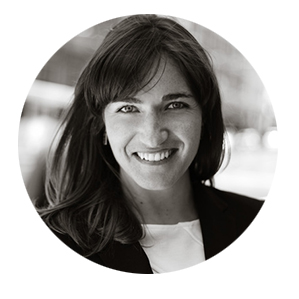 Amanda Eaken is Director of Transportation and Climate in the Urban Solutions Program at the Natural Resources Defense Council (NRDC), where her work focuses on decarbonizing transportation in the United States. She is currently leading a groundbreaking analysis of the environmental impacts of the Transportation Network Companies Lyft and Uber, to help understand whether these shared mobility providers compete with transit, creating new emissions and congestion, or represent part of an evolution in sustainable mobility.