Future-Proofing Transportation: The Missing Opportunity For Our Cities

Future-Proofing Transportation: The Missing Opportunity For Our Cities

Congestion is made of people. Today nearly every medium-sized to large city in the United States is facing a traffic crisis. People are moving into city centers in droves. The number of people who live in cities is projected to rise to nearly six billion by 2050, up from the current 3.5 billion people (or around 50% of the world’s population).

In the U.S., many of these centennial urban areas are now struggling to figure out how to add mass transit into a city designed first for horses and later for cars. And cities pursuing smart growth density are actually creating even more congestion as they add vertical density without the ability to add roadways.

The focus on transportation has remained stubbornly on providing relief for the suburban commute with rapid bus, rail, autonomous vehicles — all technologies that are literally grounded and constrained by the existing footprint of a city. So while users increasingly want the predictable trip time shown on their Uber app, these technologies promise much but ultimately run at the pace of existing traffic.

It turns out in order to get the greatest benefit from autonomous vehicles, one needs roads but there is nowhere left to build them. But what if we considered alternative modes of transportation that future-proof our transit needs?

My advice, look up. There is a lot of wasted space up there. 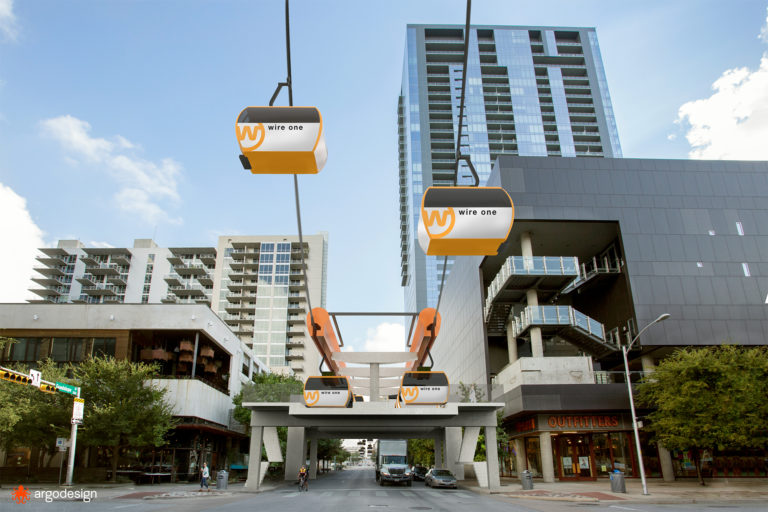 Things are Looking Up

This picture explains why there are currently over a dozen public proposals floating around the U.S. attempting to tackle transit woes with automated, overhead transportation. Overhead transportation literally takes us off the road and allows us to take advantage of underutilized urban space above our roadways. Like the subway, it allows for the addition of capacity without displacing existing supply. But it does so with a much more attainable profile of routing, cost and construction.

“Overhead transportation literally takes us off the road and allows us to take advantage of underutilized urban space above our roadways.”

There are existing overhead transport systems world wide and proposals are gaining traction in the U.S. and starting to be taken more seriously in cities like Brooklyn as a viable mass transit alternative.

So what alternative modes of transportation should your city be evaluating?

In North America we’re less familiar with urban cable as a transit solution primarily because we only ever experience its cousin, the ski lift.

Urban cable is a 10-person aerial cable car riding in a continuous loop on a cable supported by towers. Every few seconds cable cars, or gondolas, slow for loading and unloading across a level deck where commuters get on and off to continue with their day. Systems deploy in lines like a subway in the sky that can hop over rivers, freeways and pretty much anything else.

An urban cable line very quietly carries the equivalent of 50 buses per hour, per direction, in continuous operation and with no schedule. It does all of this without displacing existing road capacity and the cost is reasonable when compared to the cost of subways or surface rail.

It’s worth noting that South and Central America have been deploying urban cable systems with success for years. And not just tourism lines either, but fully operational mass transit systems. For instance La Paz, Bolivia, is the Unicorn of Mass Transit. La Paz has three lines that have carried 44 million passengers in the first 2 years of operation. The system runs entirely off of the fare box and the city is planning to have a total of 16 lines by 2030.

And there are multiple proposals being considered all across the United States. The East River Skyway project in Brooklyn has received a lot of attention in lieu of the planned shutdown of a major train line. As has my vision for transportation in Austin called The Wire.

Personal Rapid Transit, or PRT, is one of the most sustainable, clean technology transportation solutions, combining elevated guideways and pod-like cars.

Powered by batteries instead of fossil fuel and operated by computers, PRT systems don’t impact any existing infrastructure, instead they weave above what already exists. They have a storied past, but the modern PRTs offer a clean and straightforward way to bring driverless transportation to mass transit.

As a system it functions like a horizontal elevator. Cars await your arrival, you board then they take you to your chosen stop on the loop. In many ways, PRTs were the first autonomous vehicle. The most recent one in operation is at London’s Heathrow Airport, which launched its 2.4-mile track in 2011.

PRTs are being looked at again by entrepreneurs like Richard Garriott because of their ability to solve congestion problems in urban areas without impacting taxpayers or having to build expensive new infrastructure. Companies like ULTra and Taxi 20004 have ready-to-build systems for sale.

PRT systems show promise to route passengers within dense districts like a university campus, airport, or commercial district.  PRTs can handle the kind of twists and turns one might need to navigate those kinds of spaces.

The design calls for people to board pods that are whisked through a vacuum-sealed tube from Point A to B — think the pneumatic tubes at a bank drive-through. It will transform city-to-city relationships with speedy routes at airline speeds. Imagine getting from L.A. to San Francisco in 30 minutes.

Our team at argodesign decided to explore what the Hyperloop experience would be like for travelers when the concept first debuted in 2013. Since then as the technology has evolved, more concepts for the design of Hyperloop have come out.

While not an inner-city transit solution, it is worth noting it solves land use problems by existing in the second story. California is quickly finding out how expensive it is to place high speed rail on the surface. In my home state of Texas, a major intercity transportation initiative combining road and rail, known as the Trans Texas Corridor, ultimately failed as it could not negotiate the issues of capturing so much eminent domain.

Land has a long memory in Texas and many a family farm or ranch could not forget the painful results when their land was divided by freeways. However, Hyperloop will not divide such land. It will just place pylons in it. In that way it will have no more impact than the thousands of windmills that have been welcomed onto the ranches of Texas for years.

No conversation about overhead transport would be complete without the Monorail. Apart from being at the center of a great episode of the Simpsons, it is technically in a category known as People Movers. Like the Simpsons episode, the Detroit People Mover is referred to as more of an expensive joke than a viable solution but much of that is related to the overall weight of that system, the politics of its creation and the general decline of Detroit itself which actually has a positive effect on traffic congestion.

Outside of Detroit, monorails have seen a lot more success in cities like Shanghai and Mexico City for the same reason other overhead transit technologies are successful: they capture routes normally unattainable at a much lower cost.

Cable drawn trains like these are much lighter and therefore can have a similar profile to PRT. They have a limited range but a high capacity.  They are great for connecting medical or shopping districts.

Ironically, Detroit also has one of these successful modern People Movers. It is light enough to run quietly on an air cushion. So quietly, in fact, that it runs its ¼ mile route at 30 mph inside the terminal building at the Detroit International Airport.

Amazon is working on its famous delivery drones, which could free up a lot of space taken up by big brown trucks. But would you use one as a cab?  A person who flies drones in the film industry recently told me knowing what I know about drones I would never get in one.  But Chinese company Ehang plans to bring Autonomous Passenger Drones to Dubai the summer of 2018.

Who knows, maybe an Autonomous Ambulance Drone will not be far behind. All joking aside, considering that quad copter drones were a curiosity a decade ago, it is probably time for city policymakers to consider them if future-proofing transportation is a priority.

Future-proofing transportation around our cities is critical, especially in areas where new highways or rail systems are too expensive or impossible to fit. And while self-driving cars and ridesharing services could help reduce the need for parking, they still contribute to congestion, they’re less accessible to lower income groups and, ultimately, they will run no faster nor more predictably than the traffic around them.

We need more technologies than our roads, trains, buses, and bikes can offer. More importantly, we need to expand our thinking around what technologies qualify as solutions. We won’t solve a modern problem with 200-year-old thinking. The key to future-proofing how we get around isn’t finding a single new technology, it is using many technologies in innovative ways to create new transit routes without displacing existing supply. Overhead transit will play a big part in this new driverless future.

Currently the policy agenda in the United States is focused on commuter congestion at the city level. Good circulators like PRTs and urban cable could break the siege, creating a circulator in the dense core of a city. The end results benefit neighborhood residents and commuters by taking local trips off the road. And with the new administration’s stance on infrastructure, it will be interesting to see what impact this has on a shift in policy.

Despite these barriers, the consensus of transportation enthusiasts is that whoever develops the first overhead transit solution in the United States will dramatically change the landscape for others that follow. And there will be others.

Now it’s just a question of who will be first. 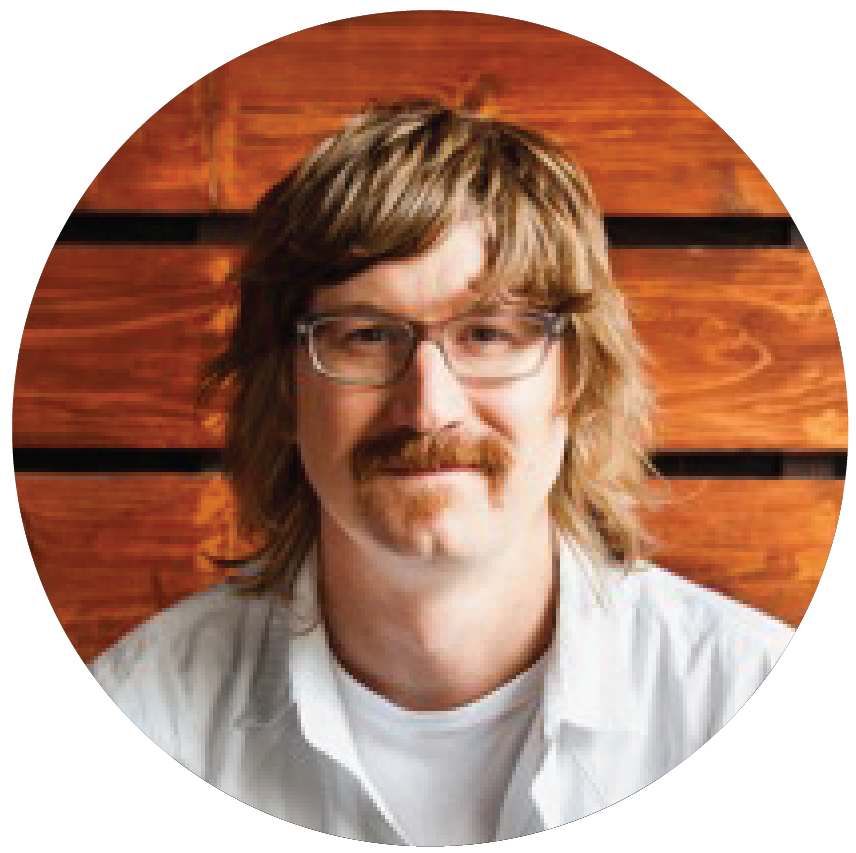 Jared Ficklin is a futurist, creative technologist and partner at argodesign with two decades of experience creating products and visions for major companies. He is also an evangelist and co-creator of the cable car based mass transport vision known as The Wire. Jared designs with technology and has a passion for innovative or unique interaction models especially those involving interesting inputs and outputs like touch, multi-touch, voice, gesture, sensing and projection. His philosophy is “Think by Making, Deliver by Demo” and employs user experience simulation as a method for quickly bringing products to life and as a method for finding new experiences when applying innovative technologies.