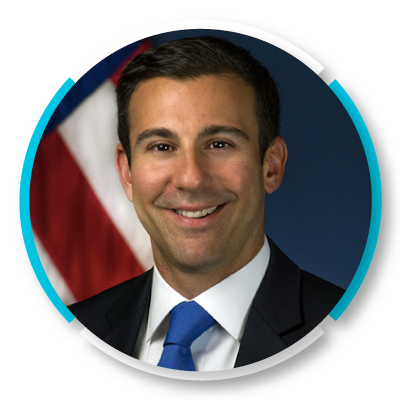 Jeff Marootian is the Director of the District Department of Transportation where he has served since March 2017. Jeff leads the agency in its mission to create a safe and sustainable transportation system for the District of Columbia and is responsible for delivering on Mayor Muriel Bowser’s priorities to rebuild and modernize the city’s public infrastructure; embrace innovation and technology to generate mobility options; and reduce traffic fatalities and serious injuries through a concerted Vision Zero strategy.

Prior to joining DDOT he served as the White House Liaison and Assistant Secretary for Administration at the United States Department of Transportation. Jeff was a member of the leadership team whose achievements include launching the nationwide Smart Cities Challenge; advocating for and helping to secure passage of the FAST Act; and creating economic opportunity through transit and mobility initiatives in communities across the country. Jeff oversaw the 55,000-employee agency’s business and management operations, including workforce development and human resources, diversity, facilities, procurement and security. He was also the Department’s Chief Sustainability Officer and directed the implementation of President Obama’s Executive Order on Climate Change and Sustainability and contributed to the Department’s strategy on electric and autonomous vehicles. He also played a key role in standing up the Build America Bureau to advance the use of public-private partnerships for infrastructure projects across the country.

Jeff is an alumnus of the George Washington University where he also serves as an Adjunct Faculty member in the Trachtenberg School of Public Policy and Administration.