The Mobility Market Is More Competitive Than Ever. Here’s How to Get Riders to Choose the Bus

The Mobility Market Is More Competitive Than Ever. Here’s How to Get Riders to Choose the Bus

With public transit ridership falling in the vast majority of cities across the U.S. and multiple modes of mobility increasingly available, the transportation method that has been described as “transit’s unsexy workhorse” – the industrious yet unassuming bus – may seem hopelessly outmaneuvered. But amid the declining ridership and multiplicity of choices there remains a crucial fact: people who are more satisfied with public transit use public transit more.

In this age of increased competition that includes car-hailing companies like Uber and Lyft, electric bikes, shared scooters and, of course, private cars, it has become more crucial than ever for transit agencies to improve the quality of public transit as a means of increasing the number of people who use it.

“One major factor under agency control can either build or discourage ridership: the quality of the transit service itself,” the public transit advocacy group TransitCenter found in a 2019 ridership report. For instance, “reliability and frequency in corridors of great demand” are, the report found, among the service characteristics that are both within agencies’ power to improve and important factors of rider satisfaction.

Most significantly, perhaps, the report found that higher satisfaction with transit is associated with higher transit use – adding up to almost one extra day a month, even when controlling for demographic and situational factors that affect ridership, such as age, home and work location, and change in income. This was demonstrated on the roads in 2018, when agencies and city governments in seven of the U.S. regions with the highest transit usage, including Seattle, Austin and Pittsburgh – compared with just four the previous year – bucked the trend of declining ridership and instead pushed it higher, in almost all cases following major overhauls of their mass transit networks or a substantial increase in service.

Here are three things transit providers can do to boost ridership by increasing the appeal to passengers:

You’ve got a meeting at an office right near a transit hub, and you’re worried about traffic and parking if you drive. So you look up how to get there on public transit… and then you see you would need to transfer and wonder if maybe it’s worth taking the car after all.

It’s not just you. As one Journal of Public Transportation study put it: “Travelers strongly dislike transferring.” The aversion to transferring vehicles during a journey is so prevalent that transportation research and ridership models incorporate what’s known as a “transfer penalty”: the perceived cost to the passenger that’s involved in transferring, taking into account the inconvenience and impediment to transit use as well as the actual number of minutes waited. The rule of thumb is that passengers consider walking and waiting time to be “two to three times as onerous as in-vehicle travel time,” according to a 2009 study by UC Berkeley’s California Partners for Advanced Transportation Technology (PATH) program.

Since transferring involves passengers either switching from one bus route to another or switching between modes of transportation, such as taking a train and then a bus, it’s not enough for transit providers to plan a single route at a time. Rather, smart corridor planning is crucial to doing transfers better, whether that means better transfer point coordination or even doing away with the need for some transfers altogether.

To effectively plan the transit for an entire transportation corridor, transit providers should be able to see one timetable from which they can view and modify all the routes that pass through the highly trafficked thoroughfares, including the departure time at the stops the routes have in common, which constitute potential transfer points. This enables transit providers to coordinate transfers that minimize unnecessary waiting time as well as the stress and frustration of missing a connection or rushing to try to catch it.

In addition to coordinating transfer points, another way corridor planning can help improve the transfer experience for passengers is by eliminating transfers altogether on certain trips. Transit providers don’t need to create new routes in order to achieve this; rather, they can select certain trips on which two routes will be merged at a stop that both routes have in common, a practice called interlining. Instead of getting off one bus line at a bus station or other transfer point and then waiting for another line, passengers can stay on the first bus as it passes through the transfer point and switches to the second route, which takes them to their destination.

Who doesn’t hate waiting and waiting for a bus, only to see three buses pull up one right after the other?

One way to reduce that phenomenon, known as bus bunching, is by looking at headways, the time interval between any two vehicles operating in the same direction on a route. When planning a transit system, headways can be adjusted either one route at a time or by viewing multiple routes in the same timetable.

Bus frequency has a major effect on ridership, but while overall frequency may be limited by overall policies and budget, transit providers can use demand data to determine when passenger load is greatest (usually during rush hour) and shorten headways at those times of day. Adjusting headways in a corridor is more complicated, because you have to take into account not just the frequency of each route but the interplay among routes as well. Passengers looking to catch not one specific bus but any of multiple lines that bring them to the other end of the corridor or another destination want the security of knowing they have multiple options and that they won’t have to wait long for those options to roll up, preferably not all at once.

If headways are frequent enough (say, less than 10-15 minutes), this can have a significant psychological and behavioral effect on passengers, who may switch from feeling bound to consult a timetable before leaving the house to feeling both freed from the strictures of the timetable and trusting enough to simply show up at a bus stop because they trust a bus will arrive shortly after. This, in turn, has significant ramifications for increased ridership and more widespread reliance on public transit. Take a headway reduction in Montreal from 20 minutes to 10 minutes, which has made “a huge difference psychologically,” one public transit user explained. “Before the change, I was a reasonably satisfied transit user,” he wrote, “and now I am a happy one.”

Headways are an important metric for bus frequency, but passengers cannot live by headway alone. If the buses don’t show up within the expected timeframe for high-frequency buses or if they veer erratically from the timetable, especially for less frequent routes that leave, say, every 30 minutes or once an hour, then passengers will be hard-pressed to rely on the transit network. And if they have a choice in the matter, they will be more likely to select alternative means of transportation that will bring them to their workplace or doctor’s appointment on time.

In other words, buses must be reliable, not just frequent, for ridership to increase. The way to measure buses’ reliability is by examining their on-time performance – the extent to which they arrive at and depart from each trip on time. Though the metric of on-time performance may not be new, it can now be measured by cutting-edge tools such as artificial intelligence.

With a data-driven network, machine learning can take historical information about the on-time performance of a given bus for a particular trip at a certain time of day – as well as about the schedule as a whole – and predict the chances that bus will arrive and depart on time. Transit providers can use this information to improve bus reliability and can even use powerful optimization algorithms to improve schedule reliability and, ultimately, the bus network’s appeal to riders.

At this time of growing mobility options, those cities that make public transit a smart choice for current and prospective passengers – particularly by doing transfers better, reducing bus bunching and wait time, and improving bus reliability – could well be the next ones to buck the declining ridership trend. 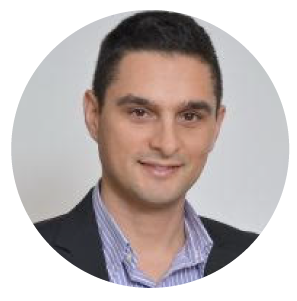 Amos Haggiag is the CEO and co-founder of Optibus, a high-tech mobility platform provider that improves mass transit performance in hundreds of cities around the world.